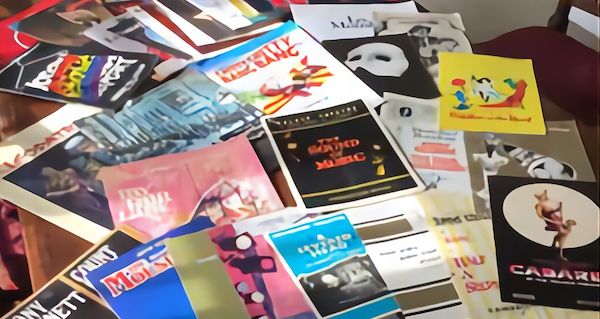 The Importance of Theatre Programmes

Theatre fans everywhere have drawers and cupboards stuffed full of theatre programmes. But, as venues become more  cost conscious and eco aware, many companies are dispensing with physical programmes. So do programmes really matter? Harry Potter and Doctor Who actor Philip Rham believes they most certainly do, and here is why:

Just imagine, I’m a young actor starting out or a more, shall we say, ‘seasoned’ actor who hasn’t worked for a long time, and the opportunity comes along to get my name out there, to show the world what I’ve got, what untapped talents that are just waiting to be discovered.

I finally get a good part, not much money, perhaps none at all, the infamous “profit share” deal (don’t make me laugh!). It’s on the fringe or not quite West End but the piece is good, I believe in it, the director seems to know what they’re doing and the rest of the cast are great to get on with. Rehearsals fly by and it’s first night, great first night reaction but I get a look at the programme.

DISASTER!! First of all there IS no programme at all just my character name and my name roughly drawn in chalk on a board. Useless. OK, wait, there must be an online programme downloadable with a QR code. I get it –  there’s not enough money to print programmes, so fair enough. I download it  and would you believe it?, it’s all about the show and what’s happening next but there’s nothing about me, about what I’ve done so far, whether this is my first professional show! To quote a famous person “I don’t believe it!”

Sometimes a programme is one two-sided sheet with just the cast list and nada more! To compound the problem the theatre’s site may just have the cast list but no link to biographies.

The same goes for creatives –  is this their first show?, what else have they done possibly for other shows that were successful? And this phenomenon, surprisingly, is not just confined to small pub theatres. Some reputable large venues don’t bother to provide the info that would help reviewers, directors, agents to identify talent.

This is frankly scandalous!

We need to make it a condition that venues should have biographies available, ideally in print form, or just even included in the one-page flyer but definitely on websites or QR links. There are many venues and production companies who are brilliant at honouring their talent – I’m not calling those out, I thank them for their care but we need to name and shame those ones that do not honour their actors and creatives. The least they can do, if not to pay them, is that they put out names AND biogs that will connect to a performance or to a creative input, and thereby reward the financial sacrifices of those who  put their heart and soul into these shows.

O venues, acknowledge, trumpet and above all identify your freely-given talent!

Philip Rham is a professional actor and singer with a wide-ranging CV across  all forms of theatre and film and TV, encompassing classical, modern, musical , music-drama, comedy, guest appearances in TV series, including Johann the Cannibal in IT Crowd and in Dr. Who’s  “Let’s KIll Hitler” with Matt Smith, as well as appearing in “Harry Potter and The Goblet of Fire” and “Band of Brothers”.

He has played at countless reps around the UK, tours in every venue and played in fringe venues in London. Most recently Philip has been giving his Captain Smith in the celebrated Southwark Playhouse production by Danielle Tarento of “Titanic – the Musical”, directed by Thom Southerland, which has been to Canada, Germany and China, as well as stints at Charing Cross Theatre and a six month UK tour. Philip recently appeared in a Harry Binstead’s short film “Sentient” which was broadcast on BBC 4’s  New Creatives Introducing Arts.

In addition Philip is a translator and teacher of French, Italian and German and  has written reviews and articles for Italian cultural magazine DANTEMAG and has been an assessor for OffWestEnd for the last four years now.
Philip Rham previously wrote for us about being An Actor in Lockdown.