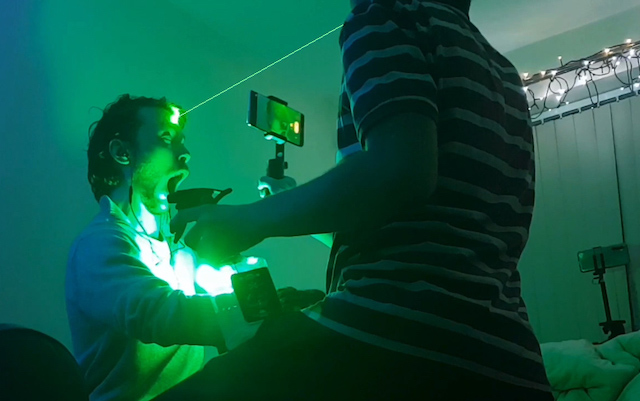 Stephen Smith on creating a live theatre experience from home

Stephen Smith of Threedumb Theatre should have been touring his one-man show this summer. Instead, he’s devising theatre and performing live from home. We asked him what it was like.

During lockdown, I experimented by creating a new style of digital theatre and produced two Facebook Live shows: ‘The Tell-Tale Heart’ (which won an OnComm) and ‘Within’.

Our shows combine filmmaking with live theatre: intimate, immersive and imaginative one-shot films, but with the immediacy of theatre by being performed completely live to an online audience. Our aim was to create, to the best of our abilities on lockdown, a ‘live theatre’ experience, for those who, like us, were missing one.

As lockdown began being enforced, it became apparent that my UK tour of my one-man show ‘Dog/Actor’ (@dogactorshow) – which was due to tour from June-August, was not going to happen, and I was absolutely devastated. But – it is amazing what work can come out from that ‘rock bottom’ feeling, or when you are faced with limitations. I had a ‘eureka moment’ when I realised that Edgar Allan Poe’s ‘The Tell-Tale Heart’ – a short story that I have loved since childhood – would make a perfect Facebook Live show. Not only is it written entirely in the first person and a popular story within the public domain, but the whole story takes place in one house, mostly in one room.

After looking at the ‘live theatre’ that was already online, I decided to create a show that had the production value of an NT Live (a struggle in itself with no budget) but I wanted the show to be 100% live for the audience – no edits or cheats, therefore lacing the finished product with as much risk and danger as any other form live performance.

There were unexpected challenges: how to stop the auto-focus on our mobile phone going crazy, or how to achieve a full blackout without a professional lighting rig (not as simple as just covering the lens with your fingers), or how to ensure that we have the best internet connection for the live shows.

After a lot of hard work and rehearsals, ‘The Tell-Tale Heart’ went so well that we smashed through our ‘pay what you can’ target on the first day. This generosity and positive feedback spurred us to follow up with another, much more ambitious live-stream.

Next was a science fiction solo show, written by my friend Joseph Furey – ‘Within’. I had seen Joseph perform the play himself at the Edinburgh Fringe and remembered how appropriate the piece was: it took place all in real-time, all in the same room and on the theme of isolation. Our 50-minute Facebook Live show featured a full original soundtrack, lasers, fake blood, fake puke, fake sweat, zombie contact lenses – not to mention Millie Webber, who I still haven’t met, being the best unseen scene partner ever!

Both shows were created with the same three-person team: one actor (me), one cameraman (my younger brother) and one production assistant (my girlfriend) – none of whom had any experience in digital theatre.

We were resourceful, filming on a mobile phone, using makeshift lighting and sound effects, live music, homemade props, costume changes, set pieces, special effects, animation – all the trimmings that you would find in a fringe theatre setting. Our shows are essentially ‘one-shot films’ and, as in films, we start with a live credit sequence. After which, we try to keep the shots varied, engaging and deliberate in their storytelling.

Regarding this ‘new normal’ that we have had to adapt to, I am counting down the days till I finally get to sit in a dark theatre to be blown away, or be up there ‘treading the boards’ myself…

However, I am proud of creating these shows and I am excited to see how this super-accessible style of live performance develops – it is certainly something I’d like to delve further into, as I think we’ve only scratched the surface.

Watch The Tell-Tale Heart and Within on Scenesaver. Help Stephen make another show from home by donating to the Go Fund Me. Follow on Twitter @ssmithactor.