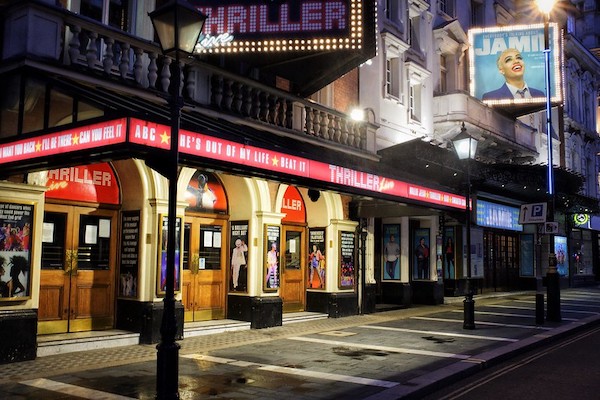 What a year it has been. Twelve months since the lights went out in the theatre world.

And on that momentous evening last March, many people thought it would just be a temporary hiccup. We’d do this thing called lockdown and then theatres would open up and resume their runs and everything would be back to normal.

But, of course, none of us fully understood the situation, and, yes, there was so much to learn. A whole new vocabulary:- Coronavirus, Covid, R numbers, furloughing, zooming. A new way of life. People were in shock.

It has been a terrible year impacting on so many – horrific numbers losing their lives or suffering life-changing symptoms, stories of jobs lost; domestic abuse; illnesses left untreated; combined to create a tragic catalogue of suffering.

But despite all this, many in the theatre world have hauled themselves from the depths of their initial shock and depression and used the past 12 months to do what they do best, to live up to their names as creatives and make truly amazing and wonderful work.

They have improvised, designed and thought outside the theatre black box, to harness technology and turn whatever they can into great performance. Mobile phones, Zoom, you name it, a performer out there is using it to show their work! And, as the weeks turned into months, they pushed boundaries and overcame obstacles to carry on creating theatre for performance-hungry audiences.

It has been a privilege for Scenesaver to share this work with theatre lovers across the world. We have been blown away by the performances. It would be wrong to single out anyone, when so many have created such truly wonderful work.

Of course there have been casualties within the theatre world. People have lost their jobs, or not qualified for financial help and had to turn to new roles. Having been in contact with so many in the industry it is uplifting to know how so many selflessly volunteered to help in whatever ways they could. Setting up food banks, delivering medicines by bike, driving lorry loads of PPE to hospitals, giving care to the vulnerable, helping out wherever there was a need. Setting up support groups, making a valuable contribution in the new normal in so many different ways.

The pandemic catapulted theatre into the 21st century- a technological age. Purists may frown but theatre has come a long way since its days in ancient Greece. It is forever evolving and changing, building on its past to create an exciting future.

Theatre will never be the same as cinema, because with theatre you need to use your imagination, let yourself be transported to a new and different place. And that is why it has been so important over the last 12 months. When things are at their bleakest you can watch a performance and for a short while lose yourself in a different world.

It would be wonderful to be able to say, as we mark the anniversary, that the pandemic is behind us, but sadly there are still many challenges facing the theatre industry. The pandemic has shown us never to take things for granted. So theatre makers are more cautious. We may have the road map and open air productions should hopefully resume very soon, with indoor theatre to follow in May and June, but none of this is guaranteed.

One thing we do know is that the past 12 months have not been completely wasted. Some wonderful new plays have been written and performance rehearsals are starting. A huge amount has been learned from using technology and this innovation is sure to feature in the new and exciting performances that will be staged in coming months

So yes this year has been one I feel sure none of us would want to revisit but it has shown us that theatre is hugely important to thousands and thousands of people and that, whatever happens, whatever life throws at them, creatives will continue to astound and entertain us with their incredible performances.