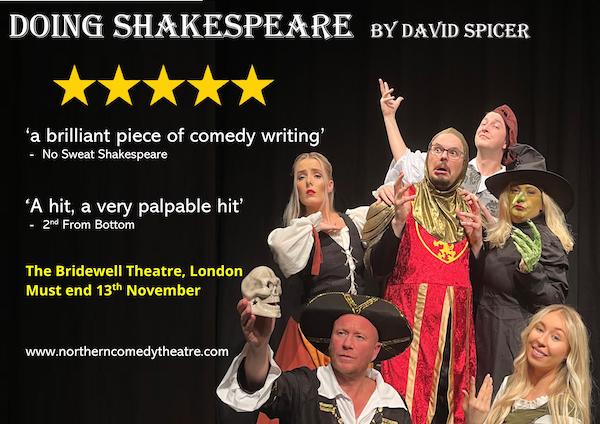 Doing Shakespeare from Zoom to Room

David Spicer is the writer of the excellent “Doing…” comedy series of Zoom shows by Northern Comedy Theatre, shared on Scenesaver during the pandemic. The company recently took to the live stage again with “Doing Shakespeare”, receiving excellent reviews. We asked David to reflect on the journey “from Zoom to Room”.

So…way back in the inky mists of time, when plague stalked the land and the world locked itself down in fear of the dread virus (it was March 2020) my friends at the Northern Comedy Theatre were watching their best laid plans for a regional tour of my play, Health & Safety, collapse and disappear like smoke made with the fume of sighs. And I, like the rest of country, was sitting in Southeast London, twiddling, biting and pricking my thumbs and bewailing our common fickle fortune. Theatres were all closing down and as an industry, we were in a pickle.

But it didn’t take long for Shaun Chambers, the enterprising Artistic Director of the NCT to call from Liverpool and suggest we clamber aboard the on-line revolution that was about to happen and present the play via something called ‘Zoom’. Shaun, as anyone who’s ever met him will know, is a man of boundless energy and enthusiasm and as much as I hate to ever rain on his chips or micturate on his marbles, my reaction was an automatic and firm ‘No Way’. Health & Safety is a farce full (some may say over-full) of confusion, bustle, misdirection and characters falling out of windows. I simply couldn’t see it working on Zoom with actors who are several miles apart trapped inside their own immobile picture frames.

Now, it could be that I was wrong. I am the father of teenaged children and so I am used to being wrong about many things. But if could have worked, then I honestly couldn’t see how. The limitation of the format were too great.

However, I suggested that maybe I could write something new, written to be performed by socially distancing actors on Zoom and with the pandemic as a backdrop. Shaun responded with his characteristic enthusiasm and by the time we finally ended the call we had agreed pretty much everything that was to come to pass.

Everything except what the play was going to be; Shaun very kindly left that bit to me.

I have been asked on occasion to explain my creative process and I never know what to say. I think my creative process is a bit like my gall bladder; I know I’ve got one but I don’t know exactly where it is or what it actually does. And I certainly don’t know how the bugger works. I just trust that it does and let it get on with it. I don’t feel the need to examine it too closely. However, if pushed, I’d say what happened after the call from Shaun went something like this:

I knew I had six actors (the cast of Health & Safety) standing by ready to throw themselves into whatever I came up with and so my first decision was to keep it simple and keep them as actors. I like actors. They are funny and neurotic characters. And a small village amateur dramatic society is a good place to set a comedy.

So: what play are they doing? Either I was going to write one (a play within a play) or pick one from any very well-known and long dead dramatist who’s estate wasn’t going to complain or ask for royalties.

Bit of a no-brainer, really. 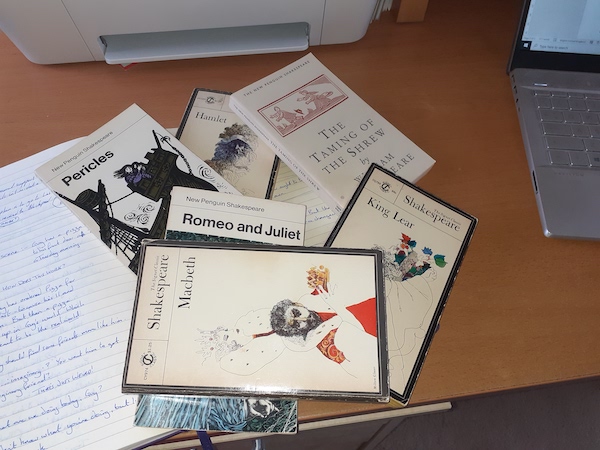 So, I spun my chair and picked my battered copies of King Lear, Romeo & Juliet, Taming of the Shrew, Macbeth and naturally, Hamlet off the bookshelf to decide which one they would do. And as I looked at them, jumbled on the desk, I was hit with the idea that if these actors were socially distanced and relying on email and WhatsApp then maybe confusion (that staple comedy ingredient) could make its masterpiece and they could all think they doing a different play. If I chucked in the obscure one that I studied for O Level English then I’d have six actors trying to do six different Shakespeare plays.

And that was it, really.

I hit the books and started trying to match up lines in the plays: getting Hamlet to argue dreams with Romeo and Lear to speak to Katherine and Lady Macbeth. It was good fun. And all the time the characters of the actors playing the parts were developing – the egos and squabbling.

Naturally, I took enormous liberties with the original text but it was a very liberating process. I have always been secretly awed by Shakespeare and the way he is revered. Of course it is right that he is but it can also make his plays feel inaccessible to those of us who only scraped a ‘C’ at O Level. I wanted the rude mechanicals to take over and present Shakespeare (and there is a lot of Will in the play) in a way that would make the groundlings laugh.

Because in March 2020, that’s what it felt like we needed to be doing.

Doing Shakespeare went online, performed live each night, in June 2020. It did well and found a cyber audience and I went on to write eight more Zoom shows for Shaun and the actors. And we discovered that through that boringly grim lockdown there was not only an audience out there wanting to laugh but there were lots of good people like Scenesaver, MyTheatreMates and the Off West End organisation who were both supportive and tirelessly encouraging. And it’s because of that encouragement that now, as theatres reopen, that Shaun the Enthusiastic and I have decided to take Doing Shakespeare ‘from Zoom to Room’ and put it on a stage where it belongs and (hopefully) works as well as it did online.

I have kept the characters and the plays they are doing the same but have tried to rethink the logic of the piece. Now people are meeting, is there still the same confusion and absurdity that would lead six actors to attempt six different plays? I like to think that whilst there are Am Dram companies playing in village halls there is.

Check out our collection of online shows by Northern Comedy Theatre and visit their website to get to know the company better.