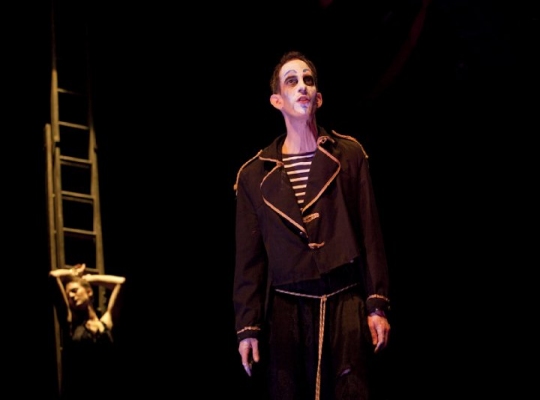 Dan Horrigan reflects on filming performance throughout his career

Dan Horrigan is a an award-winning writer and director for stage and screen with 20 years experience. He has shared performances from his archive on Scenesaver as well as new monologues so we asked him to share his reflections on filming performances throughout his career.

When I moved to London in 2003 to train as an actor one of the things I knew immediately was that work conducted in theatre is ephemeral. Audiences don’t see most of the work that goes into production, they don’t see the experiments, the ideas, the rehearsals, the things you grab by the tail but let go of somewhere in the jungle of creativity – because you’ve found the treasure.

Also, I decided to spend most of my time experimenting in public – also known as The Fringe. On the fringe you are still driven to present a professional standard but you have a certain freedom to experiment, to choose the path less taken, and it shouldn’t only be a place where you can see what you can see on the West End, or Off West End.

For all the glorious work on the fringe modelled on (for example) new writing theatres such as Theatre503 and The Finborough there is the chance to go after the ideas that can sustain your work as you develop and grow and change as an artist. You can literally start a project with a square and after several years of experimenting with its ideas, themes, and tones you can get yourself a circle – and say you really refined and developed the work to get that.

And how do you know how you change and develop as an artist? You record the work. You record it on audio and you record it on video – not only to bring a final finished product to an audience who may not always get a chance to see The Broken Heart by John Ford – but as a record of the real blood sweat and tears it takes to develop as an artist. To know yourself and to remember how you got to where you are – and how you can develop. Where we are now is tenuous, uncertain, and perhaps also that process of recording the work now has another function: it stands as a record of what we may lose. People have said, often enough that I would mention it here, that theatre isn’t something you can hold on to – that is the beauty of the form – and that’s true. For audiences it’s always been special to be bound by time and space that you share. But for someone such as myself it’s always been important to document and progress the ideas and the work.

Where we are now – where we have to fight to prove that even though we give back 5 pounds for every 1 pound invested – and therefore a really strong and robust investment in the arts makes complete fiscal sense (even at the level of billions) – my own modest contribution can be seen as part of an ecosystem and your enjoyment endorses the survival of that ecosystem. So, in many ways the recording of the work which now finds a platform at this time with Scenesaver also proves the point: time and space really are ephemeral and the reason it’s not necessarily looked after is that it encourages people to think imaginatively about their relationships to their material reality. That’s not always something you’re allowed to see.