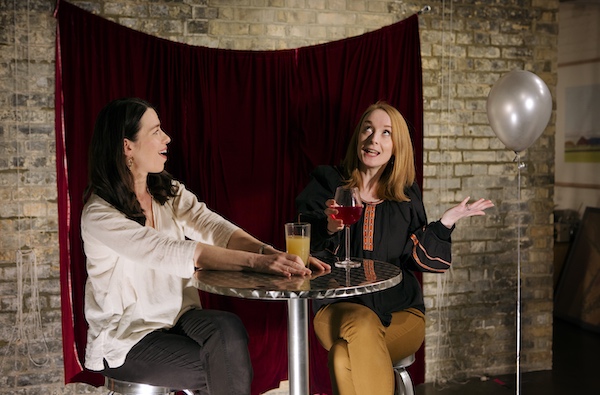 About 500: On pivoting to a Zoom performance

Simona Hughes is the writer of OnComm winner, About 500, available to watch on Scenesaver. Here she shares the story of how they pivoted from opening on stage at VAULT festival, to recording the performance on Zoom in lockdown.

We were due to open 18th March, the final week of VAULT festival, and were rehearsing right up to the day before, with a level of blind denial akin to that displayed by the orchestra playing on the deck of the sinking Titanic… All around us, theatres were closing, but we continued to hope and pray that our small little pub venue would somehow see us through just in time, and that we could lure some audience into attending with the promise of hand sanitiser….

And then suddenly everything changed.

VAULT cancelled all remaining shows. We collectively surrendered to the pain and grief of our loss.

We briefly considered that we could still make a video of the performance…. Our health was just about holding up (or was it?). As we set about preparing to do this, some symptoms began to surface in our separate ecosystems, and the prospect of using public transport was rapidly becoming a risk too far. And so, with heavy hearts, we cancelled this too.

We just had to face that our ship had, for now, sunk.

We met online to say our goodbyes and discuss how we might each constructively use the time of isolation. No one at this stage had even heard of Zoom…..

About a week later, the Tower Theatre company (London’s most active non-professional theatre company) offered us a slot on their (very quickly established) “virtual” theatre schedule to perform the piece on Zoom. After a few Zoom rehearsals we quickly learnt what worked and what didn’t and how to translate performance to this at once intimate and dislocated medium. The ‘Virtual Tower’ performance (with an audience of 63 viewers) went very well, with only a few slight glitches. Two days later we reconvened and filmed / edited another Zoom performance, under more controlled conditions.

Debriefing since as a team about this process, the cast have reflected on how the interval between being about to go up at VAULT and recording the Zoom performance, was sufficiently small (and empty!) as to allow them to hold in mind each other’s responses/reactions, so that when addressing the “camera” (and being unable to see co-actors faces properly), this internalised memory served them, and provided them with sufficient material to “act against”. I think this really comes across in all 3 performances and enabled us to really get the best out of our circumstance.