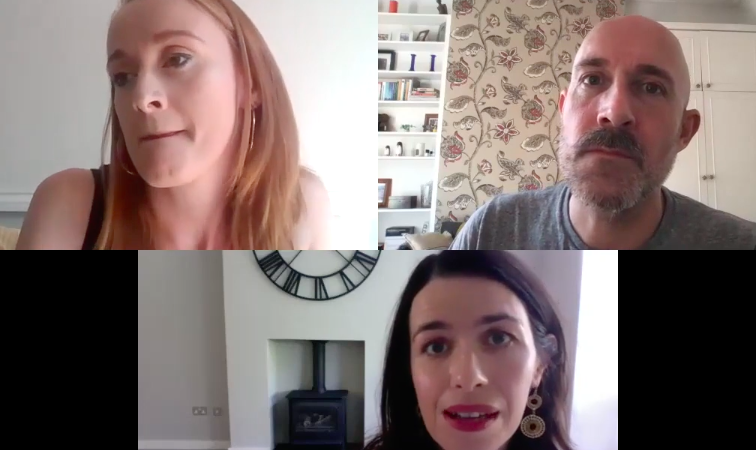 Tips for performing on Zoom and sharing your work on Scenesaver

Scenesaver is hearing from many of you who are doing amazing work online on Zoom but are not quite sure how to go about adding it to Scenesaver, so we thought we would give you a few tips.

Rule number one, if you’re performing ‘live’ make sure you set your audience attendees to muted with video off. Otherwise they are going to ruin your recording. And yes, that includes the performers when they aren’t taking part!

This YouTube tutorial will talk you through recording your Zoom event.

And remember you can always create a controlled version by doing a special, planned, recorded performance, to an invited audience or none, so that you can ensure you get the quality of content you want to share on Scenesaver.

Settings: “Gallery view” usually works better than “Speaker view” (top RH corner of screen) as a performance mode. This allows audience to give equal attention to the “listening” actor(s) as to the speaking actor. With larger casts, in order to have best view of actors who are active in scenes, the actors who are either “off stage” or who don’t have many lines, ideally should mute themselves and turn off their videos. You are aiming to have no more than 4 tiles active on screen at any one time so that performers faces are big enough for audience to ‘read’ their performance fully.  Also use “hide non-participants” (located under the 3 dots on top right-hand corner of a tile) so that any non-performers who are part of the zoom meeting (e.g director!) are not seen at all.

Ensure all performers are getting the most out of their broadband. Ideally using laptops (rather than tablets or phones) to film and situating themselves as close to modem as possible, or using a cable direct into modem. (They may want to ask housemates to lay off internet while you are recording).

Gaze: If actors are off book, they should aim their performance as much as possible to the “camera” (little green light at top of screen), which works for both direct address to audience but also ‘reads’ as eye contact between actors. (Don’t be tempted to look at a co-performer’s face as you direct your lines to them, as this ‘reads’ as looking down/avoidance of eye contact). If scripts are being used, they should be open docs on screen, side by side with the zoom window, and magnified so that the actor can still read from a bit of a distance, and constantly scrolled so that actor’s gaze is just below camera as s/he reads.

Voice and gesture: Movement should be kept to a minimum, (and needs to be slow and purposeful when employed, otherwise the image is blurred). Less is more when performing on zoom, think of it as half radio half film/tv in terms of technique. Most of the acting is through the face and voice needs to be used with subtlety- raised voices/projection doesn’t work as it distorts sound. Most laptop mics are very sensitive. If actor approaches screen to create a greater sense of intimacy, they need to adjust voice accordingly.

Cues: Actors should bite cues even more than they would in live performance, as zoom involves an inherent sound delay. However, sometimes the first sound that is vocalised can be missed, so starting a line with a vowel (aaah, eeerh) can really improve pace and naturalism, e.g

-How are you feeling?

-How are you feeling?

The crew behind The Show Must Go Online have some good resources are happy to be contacted for further tips, Tweet @RobMyles.

Top image: Screengrab of the Cast of About 500 performing on Zoom.