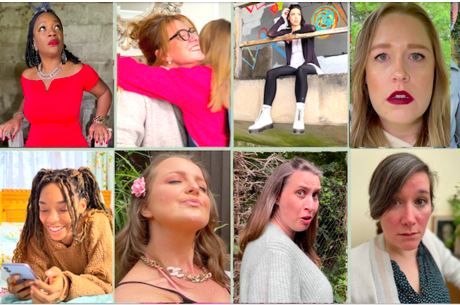 Nia Williams from Three Chairs and a Hat talks about how Shakespeare (she/her) came to be made. The digital project of 35 monologues is released on Scenesaver on Friday 15th October at 7pm with daily premieres thereafter.

It started as a chat over coffee. No: rewind a bit further. It started in the grounds of Oxford Castle. I’ve lost track of pandemic chronology, but this was one of the windows of relative freedom, and two enterprising theatre companies, BMH and Siege Theatre, were seizing the opportunity to do a socially distanced alternative to the annual outdoor Shakespeare play. Instead, we enjoyed an evening of Shakespeare highlights: monologues taken from a range of his works. Far from being a consolation prize, it was riveting. Without the complications of plot and full cast, the spotlight was on Shakespeare’s text and all its nuances. I found myself listening—really listening—to characters who, frankly, had all but passed me by before. Particularly female characters. Shakespeare is always startlingly relevant—because he’s human, and compassionate in the fullest sense, and people are still people, however many centuries apart. But this made me think: who are Shakespeare’s women? And how powerful would it be to focus even more tightly on their words—on a screen, in close-up, as we’d all been learning to do by necessity over the past year?

So—back to the chat over coffee. I was meeting Wayne Brown, who’d directed my musical ‘Melody’ for Three Chairs and a Hat, the company I originally set up to stage my own work. Having seen the way Wayne mined the script and brought out more detail than I knew I’d put in, I was sure he’d be interested in exploring Shakespeare’s text. ‘I’ve never directed Shakespeare’ was his first response; ‘I can see how we’d do it’ was the next. From that moment, he picked up the project and flew, casting 15 talented actors and, with them, studying monologues and sonnets, rehearsing online, in gardens, parks, sheds, woods; identifying contemporary contexts for words written over four centuries ago, bringing their humanity and relevance into clear, present-day light. 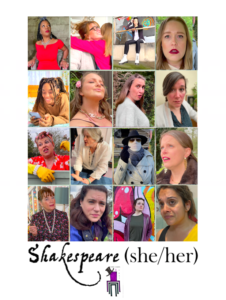 The result is Shakespeare (she/her), a collection of 35 monologues, sonnets and songs, to be released, one a day, at 7pm on Scenesaver from 15th October. A daughter, devastated by her father’s dementia. A self-harming victim of domestic abuse. Women who wield power, and women who rail against its absence. There’s comedy, too, and jealousy, and irony— every video giving its own intimate portrayal of one woman’s story.

The project was previewed as two compilations, one each at the Brighton and Edinburgh online fringe festivals, and the response has already been remarkable. Glasgow schoolgirls have used the videos to inspire their own monologues. In December, Shakespeare (she/her) will be part of Equal Shakespeare Festival, a digital initiative by The Shakespeare Institute and University College London to foster equality across race, gender and class. Through Scenesaver, we’ve built links with charities such as Crisis and Samaritans, in recognition of some of the issues that might hit home and prompt viewers to seek or offer help. All this, from a tentative idea over a cuppa and a catch-up.

Of course, Shakespeare’s women were originally played by men. This isn’t an attempt to force his text into a feminist narrative, or to suggest a neat fit with my values or anyone else’s. The aim of Shakespeare (she/her) is to spark discussion, ideas, recognition, and, above all, to show that a great writer has something to say to everyone—always.

Watch Shakespeare (she/her) from Friday 15th October at 7pm on Scenesaver: set a remind on the video here.